Peter Barkow – for updates on RE sign up >> HERE

We have taken another deep dive into our German RE Capital Markets database and found the following:

– GAGFAH’s recent convertible issue has been the 2nd largest ever and the largest following the financial crisis of a German real estate company.

– The largest ever German RE convertible has been issued by IVG (EUR400m) in 2007 shortly before the outbreak of the financial crisis. GSW (EUR183m) completes the Top 6 with its 12/2012 convertible issue.

– German RE convertible issuance totals EU860m via five transactions year to date. 2014 is therefore already the best year ever by a wide margin (74%). The previous record year was 2012 with six deals raising EUR494m). 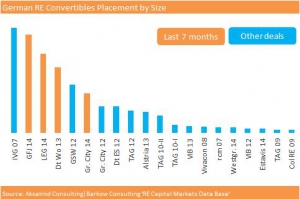