There is one big problem with new and emerging markets: Intransparency!

New markets by definition lack data and statistics. Also definitions are often manifold and anything but clear cut. Companies are not public and don’t report quarterly financial reports. All too bad …

FinTech is no exception!

Nevertheless, the German FinTech sector is remarkably transparent given its nascent stage. There are numerous institutions providing data of the FinTech ecosystem.

The only issue is: They are very different … 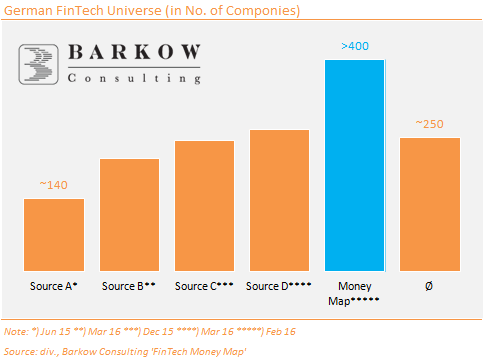 Our proprietary data base Barkow Consulting FinTech Money Map is at the high end of the range. We have not published new data since February 2016. Although this was only a few weeks ago, we can already see, that our Money Map has experienced substantial growth since then and exceeds the 400 mark by a wide margin at present.

A range from ca 140 to probably over 450 is anything but helpful and prompts the questions: Who is right?

A part from not covering the German FinTech sector well enough (and we know how tough it is …) there are other reasons for differing numbers:

Defining FinTech is more art than science. We have our definition. Everybody else has a definition. André Bajorat and his Rat Pack have written and conversed comprehensively about it.
Surprise, surprise: All definitions contain the words Finance and Technology! Unfortunately, they also contain a huge arbitrary element. In other words, each classification contains a tremendous judgemental factor.

It is like with so many things in life: You know it, when you see it and sometimes not even that.

Nonetheless, we think that most definitions are somewhat similar and do not explain the difference in numbers.

Barkow Consulting:
„Use of modern technology to provide financial services (FinTech) especially but not exclusively from (young) non banking companies.“

The largest area of difference in our view. Putting together verticals is already leading to comparability issues. Literally every data provider is following his own FinTech subcategories. Nonetheless, we think the main difference arise from the inclusion or exclusion of the following verticals:

Another area with shades of grey is whether to include FinTech activities of incumbents and non FinTech disruptors. These can come in the form of a FinTech offering/produtc or a separate FinTech subsidiary. Incumbents and disruptors also tend to buy FinTech startups.

As a general rule, we do not include any of the above. There might, however, be exceptions to the rule under certain circumstances.

The next difference is related to age of the FinTech companies:

We do include both, but the vast majority of our FinTech Money Map companies are Startups.

Anothere area of debate is, whether to include foreign FinTech companies, which offer services in Germany.

There are the following possibilities:

Generally, we do not include any of the the above in our FinTech Money Map. We might consider foreign companies with German daughter companies in the future.

Another possibility to distinguish FinTech companies is the status of their business operations:

Our FinTech money map monitors all of the above.
However, only active companies are part of our market statistics (number of FinTech companies)

If you find the above too wordy (be assured, we do …), we have summarized it in the infographic below (click to enlarge): 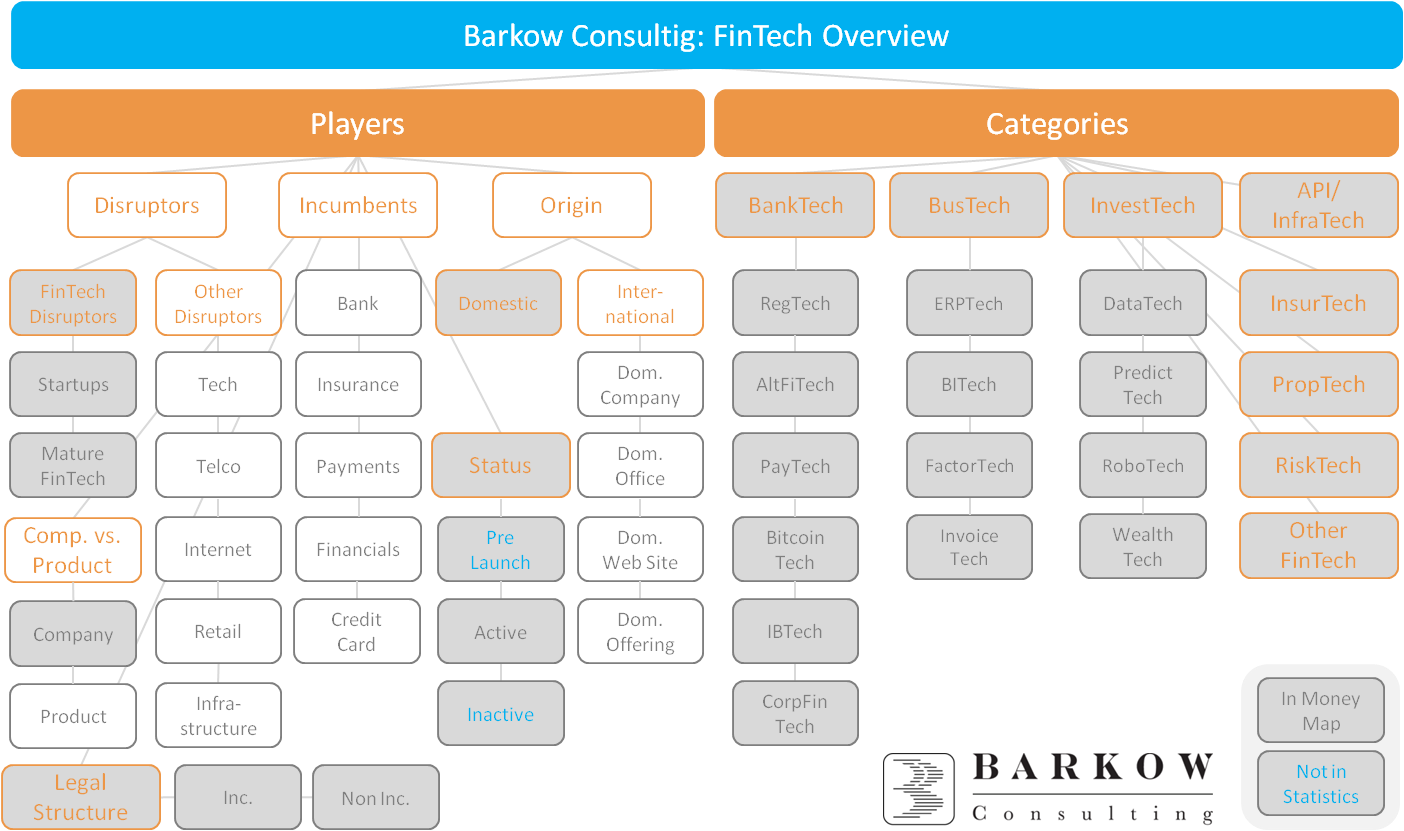