The chart below shows four phases of the German corporate loan maturity development:

Phase 2: Substantial decline in maturity until beginning of 2009

Phase 3: Steep increase in maturity in direct aftermath of the financial crisis

Especially the large short term swings during phase 2 and 3 are surprising and require explanation. According to our analysis the short term volatility during phase 2 and 3 can be largely attributed to changes in corporate overdraft volumes. Overdraft usage increased strongl y ahead of the financial crisis. Directly after the outbreak of the financial crisis corporates started to refinance overdrafts via bank loans with positive impact on overall maturity.

Phase 4 could be seen as a return to the long term trend of increasing loan maturities. Nevertheless, we also think that companies’ funding strategeies are driven by the intention to lock in currently low loan rates, which led to a slight acceleration of the trend since end 2011.

Finally, we think that maturity extension will further accelerate, as soon as fears of rising long term interest rates return. 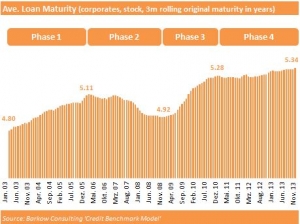