The complete newsletter can be downloaded …

In Q4 2016 indirect real estate vehicles accounted for net capital inflows of €6.5bn up 36% yoy. Due to the incredibly strong final quarter FY 2016 inflows reached yet another record exceeding the previous year, also the previous record for inflows, by 5%. 9m figures had still been 6% below the year ago period. The FY2016 record is therefore surprising. (Chart 1 & 2)

Listed RE inflows were soft again in Q4 2016 at € 0.5bn up 11% yoy. Nonetheless, our number almost entirely consists of €0.5m of capital issued by Vonovia to conwert shareholders as part of the takeover offer. As a consequence deals exceeding €100m were absent in Q4. (Chart 2 & 3)

Q4 2016 was the best ever quarter for net inflows into institutional OEFs by a wide margin. Net inflows totalled €4.9bn up more than 60% on the previous record quarter (Q4 2015). Apparently Q4 seasonality is getting stronger every year for institutional OEFs. (Chart 2 & 4) 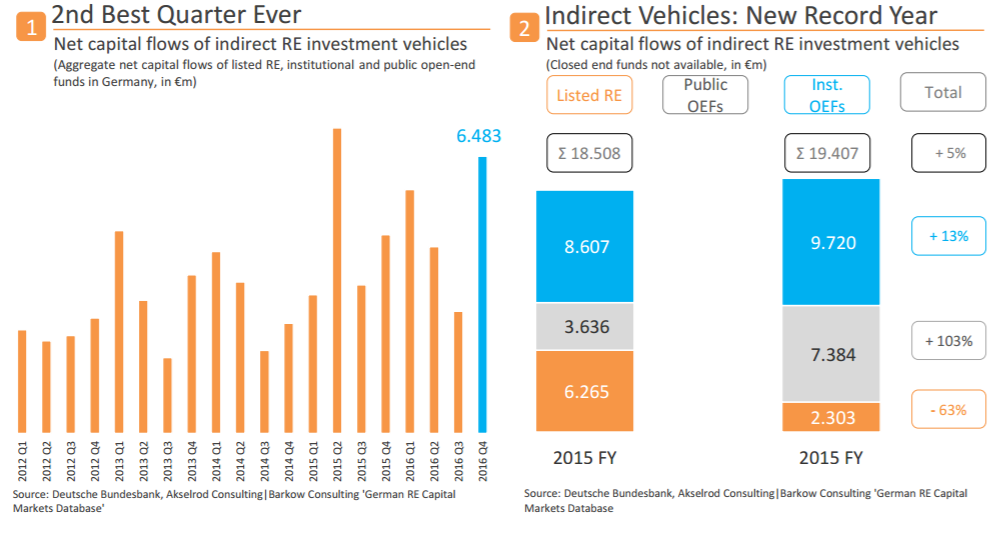